Wordclouds can be very useful to determine what customers are saying about your product or service. They can be created using the R Programming Language in a relatively short amount of time and customized in a variety of ways. I’ll walk you through the process of creating your own Wordclouds and customizing it based on Twitter data.

The first thing you’d want to do is install the R Programming Language. The most recent version can be found on this website. When that’s completed, I strongly recommend installing RSudio. It can make your programming in R a lot easier, unless of course if you really enjoy programming in the terminal.

Now that you’ve installed the required software, the next step is setting up an account with Twitter and creating the Wordcloud app. This will allow you to interface with their API in order to download the tweet data.

Open up RStudio and type the following:

Next we’re going to authenticate our app information with Twitter. Enter the following code:

The next step is the most important. We will now craft how much (that’s what the n is for), and what kind of tweets (we’re searching for Tweets where cheese is mentioned) we want to collect from Twitter. Type the following:

The above code can be modified in a wide variety of ways using different functions of the twitteR package; feel free to experiment with it.

Next we will create a Corpus, which is just a fancy way of saying a collection of data.

Now that we’ve created the corpus, lets clean it up. We’ll make all the words lowercase and remove punctuations, numbers and whitespace from the tweets. Sometimes it may be useful to remove the main word from the Wordcloud. This is due to the fact that the words will be displayed larger based on their frequency, and since we’re searching for a particular word, we know that it will appear all the time. By excluding it, you get to see what people are saying about it without the word itself occupying a large amount of space in the word cloud.

If you’re on a Mac and got some errors, the piece of code might help

Okay! Lets can finally run the code the creates the Wordcloud from the tweets we’ve collected.

If everything worked out, you should be seeing something like this: 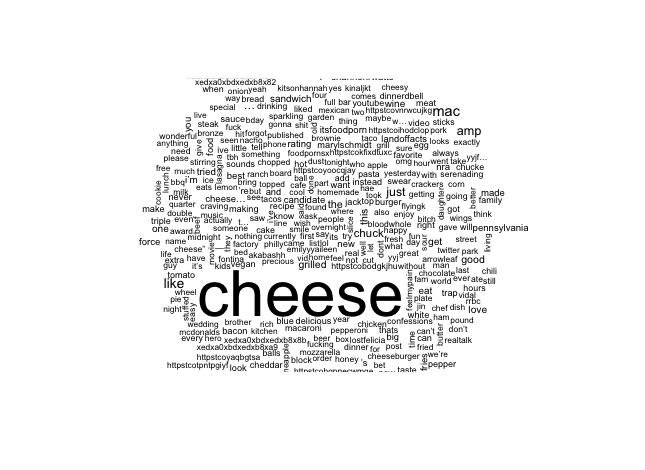 Not very impressive I know, but we can spruce it up a bit with this:

This code limits the number of words to 100, determines the range of the size of words and adds color to the Wordcloud. After running it, your Wordcloud should look something like this:

Now you have a swanky new Wordcloud, don’t stop here, tinker with it, try new functions and have some fun!